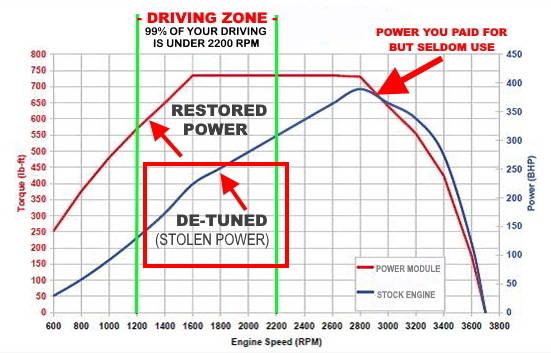 ARE YOU GETTING "ALL" THE POWER YOU PAID FOR?

UNUSED POWER:
We understand your diesel has plenty of power (at peak RPM)... but we also know that you seldom use it.

Ninety-Nine percent of the time truck owners like yourself drive their diesels under 2200 RPM.

This means you PAID for power you seldom use!
This UNUSED "phantom" power looks good on TV Ads for "Best in Class" but it's like paying the price for a two-story home and never using the second floor.
STOLEN POWER:
In 2004 diesel engine manufacturers were forced to add emissions equipment under Tier 2 Standards and DE-TUNE the engines under 2200 RPM to pass emissions testing.
The FACT is DE-TUNING is "stolen power" which is the main cause of poor fuel economy and sluggish throttle-response  (not the added emissions equipment as many believe)
While this "stolen power" practice satisfies emission standards... unfortunately it also costs you low-end performance and fuel mileage...Bigtime!
THE CONUNDRUM:
On one hand you paid Big-Money for peak power you seldom use... and on the other hand you paid Big-Money for low-end performance that has been stolen to meet emissions standards.

There is a SIMPLE, Low-Cost , Warranty-Friendly Solution that RESTORES POWER and Improves Fuel Economy and Throttle Response!